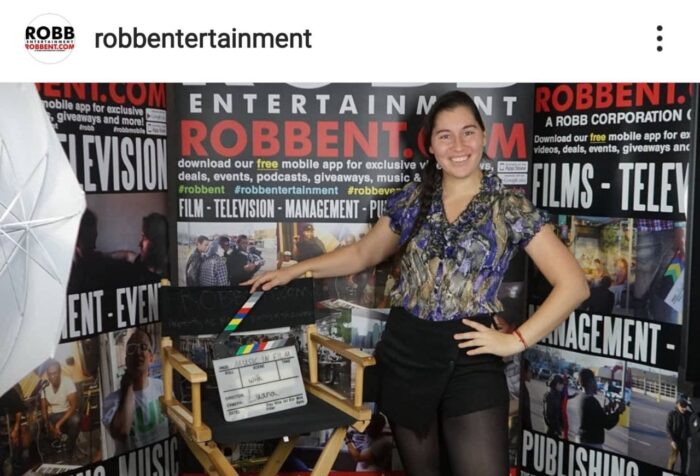 I met Luana Sandoval when she was a PA – Production Assistant – on one of my film projects (Transcendence). I had a conversation with her on set and decided to give her a speaking role so she’ll have credits because she wanted to be an actress. After that project wrapped we kept in touch and started speaking about numerous other projects. During one of our conversations she told me about this producer who she worked with on her first music EP who she paid and he not only took her money but also the publishing rights to the project. Again, she told me that which looking back on it could’ve been a major lie on her part. I wasn’t speaking negatively about her “working relationships” as she lied online. After a few more discussions she asked me to manage her (there were even photos of the signing on the set of the podcast I created for her – Music In Film). I obliged and now completely regretted that decision.

Luana posted the message below on her Instagram page:

…with ZERO context and a mini essay of lies so let me provide some facts:

1). I did NOT talk negatively about her “working relationships”. She didn’t have much and she was the one who told me about the producer who she said stole her publishing.

2). I created and executive produced a podcast for Luana – Music In Film. She was supposed to be the sole host but due to the fact that she couldn’t carry the show I had to be the co-host in addition to producing, editing, marketing and distributing the show.

3). The plan was to build Luana, the brand. She wanted to do many many things (acting, singing, composing, songwriting, etc.) and this would be managed under Luana Sandoval Corporation. I explained this to her in multiple ways. Also, this is typically how it works in the business…but I guess, according to Luana, I don’t know the business.

4). Speaking of Incorporating: Luana introduced me to a guy who said he was a producer who wanted to help develop her sound. This guy wanted me to pay him to incorporate a company for him and Luana. You know what Luana said? “Yes, that’s a great idea.” You can’t make this stuff up!

5). I did NOT make a penny during my time as Luana’s manager. It definitely cost me though.

6). I’ve been a talent manager for over ten (10) years and I currently have over twenty (20) clients who are actors, singers, rappers, producers, writers, models, etc who I’ve negotiated many deals with in which they were compensated pretty well (cash, equity, etc.) I would say I know the business side very very well.

7). Luana had potential because she showed initially that she wanted to learn but it’s very very obvious that she had nothing else. No business acumen. No real talent.

8). I had brought in a few production associates who I work with to shoot a studio interview with Luana so I can start getting her some press because she didn’t and still doesn’t have any. I covered ALL of these expenses. Ask Luana if I ever asked her to pay for anything.

9). While Luana was signed to Robb Talent Group she was working on two EPs and she wanted to give away 100% of her publishing to one of the producers on the EP. The same mistake she said she made with the first EP she wanted to do again. I had to stop that. I even said to her directly: What’s the point of going to all of these songwriting workshops if you’re doing things like this? It shows that you’re not gaining anything from them.

10). Luana’s failure is 100% on her. She lacks the talent and the business acumen to achieve any real success in the film or music industry. That’s just facts!

Below are screenshots with way more clarity as to what had transpired:

What has Luana accomplished since we parted ways? I rest my case!