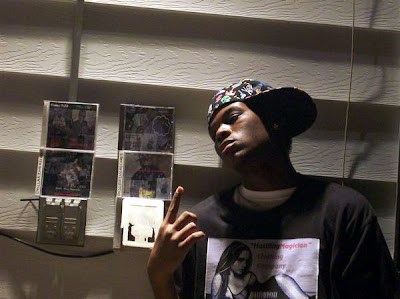 Who started this Company?????? That would be me. Hello! my name is Romane Orlando Robb the owner and creator of “Hustling Magician” and Kreative Genius Clothing Company. First off I want to take this moment to thank you all for supporting my Clothing Company. My entire Kreative (I did that on purpose for the English Majors out there) team is hard at work constantly creating the fresh and unique clothing that you all seem to love so much. I can’t thank you guys enough for all your support. I just can’t because it would go on and on forever. You guys are that great. Ok enough with the small talk let’s get right to it. I was born January 27, 1988 in Kingston, Jamaica weighing in at 7 pounds and hahahahaha sorry I just had to do it. Anyway growing up I was always different from the people I hung out with. Kind of like always being a misfit among peers. I would dress different, think different, and weird enough I even ate different (Sooooo Weird). I always had this crazy mentality that I saw everything differently than most people would. Something like the glass half empty, half full. Well I always look at the glass as half full. I look at everything as a great opportunity. A way to do something different and unique. That’s just me. I always had big dreams growing up. My friends would think about clubs, getting drunk (wasted) and parties while my crazy mind was thinking about investments (Wall Street) and ways of being even more different and unique. At age 12 I wanted to be a scientist to cure deadly diseases. At age 14 I wanted to be a doctor to save lives, and also to look cool in my white doctor’s coat. At age 16 I wanted to be a Filmmaker for the fame, hot supermodels, and money. Lol seriously though, I just have this obsession with capturing life in a unique art form. The filmmaking part of me is still here (SimpleRobb Entertainment) but when I was 18 something incredibly awesome happened. Wow! It was so magical when it hit me (LOL I should really stop with the dramatics). Anyway I started “Hustling Magician” Clothing Company in 2006 more specifically July 17, 2006 then on October 16, 2007 I added Kreative Genius Clothing Company to compliment my vision of urban meets “preppy” as some might say. Why the name “Hustling Magician”? Well it’s simple really. Hustling= Never Giving Up, Staying Motivated, Chasing Your Dreams. Magician= Being Different, Being Unique, Standing Out. Why the name Kreative Genius? This is also simple. Kreative Genius stand for a positive thinker. Someone who is both Sophisticated and Intellectual. I started both companies 100% solo, meaning without any financial backing from any investors and since I didn’t have deep pockets (lots of money) or rich relatives I had to “hustle” to get the money. This is how I hustled. First I had a part time job at Keyfood (A Supermarket) not the best job in the world, but hey it was a supermarket not really much to do there than eat the “free” candy near the cashier’s counter. Next up was a part time job at Best Buy (Electronic store DUH!!!!!) while at the same time I was selling my music (Hip-Hop/Rap) in the busy streets of Manhattan (42nd street baby!!!!!) with my close friend Demba Fall who’s also my music Co-Producer. On that note big shout out to Demba. A few months later I was in college trying to get my BA in Business Administration. At the same time I was trying to sell my simple comic books (The Knight Legend, Jeff and Friends, and New York Heroes) to anybody who had spare change (Yeah I said spare change. I’m dead serious) while also constantly writing some crazy fictional novels (Mind Games, The Ghost From Brookville and etc). My Music! My Music! My Music! I’m telling you it was/is hard work trying to sell Hip-Hop music to people who I knew had no interest in it, but hey! They bought it and supported me. I want to thank you guys so much for that. I truly appreciate it. I said “is” because it is still hard to sell Hip-Hop music to an audience, it’s even harder now thanks to Limewire and BitTorrent and etc (Suckers). Anyway I wasn’t going to be the next big rapper from Queens, New York (at least that’s what I told myself) so I had to get more “Kreative” with my Clothing Company/ Fashion Label, so all the money from CD/Mixtape sales, petty pay checks, and also the loose change that was lying around my mom’s house I took and made the biggest investment of my life. My company is all about Exclusive and Limited Edition Clothing always. I never liked walking down the block/street and seeing 10 different people wearing the same thing I was wearing so right then I said to myself “I’m producing 100 pieces per design ONLY”, so people don’t worry I’m never selling out to mass production/distribution no matter what. That’s my story, that’s my hustle. What’s your hustle?????